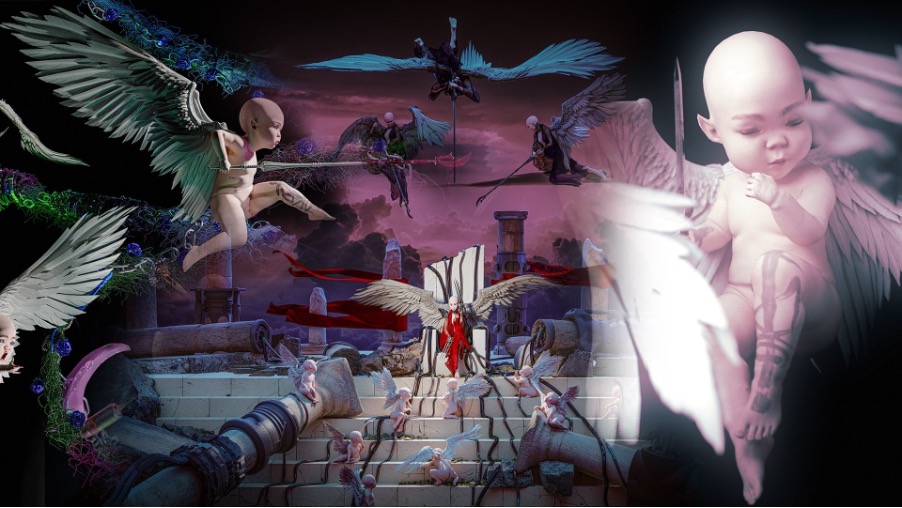 This time last year, who would have thought that we would be facing into our second consecutive St. Patricks Day in a national lockdown? Whether you’re a fan of the festivities or not, it just doesn’t seem right to not have our cities and towns lined with parades and celebrations of our national identity. This week, we’re going green… around the world and into space, talking body and digital art as well as celebrating a huge moment in women’s football. So, pour yourself a shamrock shake and welcome to OUR TAKE.

Covid may be droning on, but we’re still celebrating St. Patricks Day in style

There may be no parades or crowds of people dressed as leprechauns pouring out of pubs paying homage to the patron Saint of Ireland but in a world which has changed so much in one short year, it’s been amazing to see how our national holiday can still be celebrated around the globe as the world goes green for St. Patricks Day.

From the Chicago River to the Sydney Opera House, the London Eye to Christ the Redeemer statue, a record 690 iconic landmarks in 66 countries around the world joined our tiny island in celebration. Samuel Beckett once said, “The heart of an Irishman is nothing but his imagination” and on our national day, Ireland was not going to let any other country snake in and outshine us (See what we did there?).

Kudos to the St. Patricks festival organisers, Tourism Ireland and Dublin City Council who delivered an astounding visual spectacle called the “Orchestra of Light”, a show made up of 500 drones, lit up above the Samuel Beckett Bridge.

Is there Life on Mars? Soon there very well could be.

At one stage, the closest we were getting to Mars was David Bowies Ziggy Stardust alter-ego. Now, according to an international team of scientists and academics it’s only a matter of time before humans are living there as plans were. The Mars City project, organised by The Mars Society and developed by the SONet network, have unveiled designs for the first sustainable city on the fourth rock from the sun.

The first, and capital city, in this new design is called Nüwa and will have homes, offices and green spaces all built into the side of a cliff to protect its citizens from atmospheric pressure and radiation. It’s estimated that the first community won’t live there until 2100 which hopefully gives time to shorten the 6-month planet to planet travel time… imagine the commute. Still, might be cheaper than a 2 bed semi-detached in Dublin. Thank god for WFH!

Read more about it here from EuroNews

Before we all pack up and move to Mars, we need to embrace the power of 5G first. We’ve all heard the tinfoil hat conspiracies but most people are excited about having even faster access to the digital world we live in these days and at the possibilities it can deliver. (Did I mention Three is bringing 5G to more people, businesses & places on Ireland’s fastest mobile network?)

This week, Dutch actress Stijn Fransen became the world’s first recipient of a remote tattoo, drawn by a 5G powered robot arm, controlled 300 miles away in the UK by artist Wes Thomas. I find this whole story as amazing as I do terrifying, having never gotten a tattoo but in a world of Covid, I can imagine Sketch from Tattoo Fixers licking his lips at the possibility of devouring someone’s arm with a rose bush to hide a mistake from the 5G robot.  Read more about it in the New York Post

OMG NFT Is taking over… but WTF is the DL with it anyway?

This week it was announced that Twitter CEO Jack Dorsey sold his very first tweet as an NFT and banked a cool $2.9 million for a tweet that said “just setting up my twittr” along with his signature. Musician Grimes sold a 50 second video for $390k and Beeple recently sold a piece for $6.6million. It is becoming so popular, the world’s first physical NFT art gallery opened in New York this week.

But what is NFT? At its base level, NFT’s are classed as unique items which can’t be replaced with something else and are becoming extremely popular in art world. $2.9 million may seem crazy money to own a tweet but the emergence of NFT’s feels like a natural evolution of what once was classed as ‘collectors’ items.

Thankfully, for both you and me, we keep things short in Our Take otherwise you would be accompanying me on a trip down a rabbit’s hole. Want to know (much) more? TheVerge.com delivered a handy explainer to get you started.

It was refreshing to see news this week with Sky and BBC having agreed what has been described as a “landmark” and “transformational” deal for the Women’s Super League in the UK. It’s the first-time rights to the WSL have been sold separately to the men’s game and will see clubs in both the top and second tier receive a proportion of the revenue. With 10 Irish players based in the English topflight, and more plying their trade in the Championship this can only be good news for Irish soccer fans.

Deals which see sponsors investing in both men’s and women’s teams at club level, women’s sport across the board is continuing to grow into one of the most lucrative sponsorship markets in the business. The 20X20 movement’s tag line is “if she can’t see, she can’t be”, well we’re about to see a lot more thanks to this deal and hopefully it’s the next step to seeing more Man City, Brighton and Arsenal jerseys with “Campbell, “Connolly” and “McCabe” on the back. The42.ie have all the news on the deal here