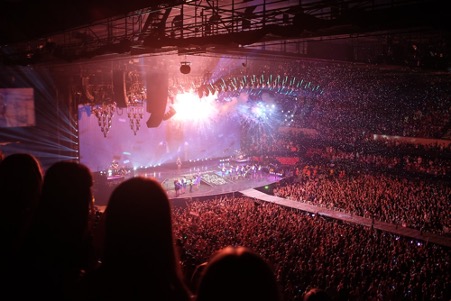 In this week’s Our Take, we turn our focus to music and look at some interesting stories involving the second coming of a pop star and a legend stepping into the virtual world. We also explore how artificial intelligence is searching for stardom. And we bring you a Nightmare Before Christmas, as an old earworm comes back to haunt us for the World Cup.

Last week Taylor Swift announced her Eras tour, – her first in five years, but many fans will get tickets only in their “Wildest Dreams”. Ticketmaster has claimed it saw “historically unprecedented demand” with millions of fans attempting to secure their tickets for the 52 date tour of the United States.

Swifties only saw a “Blank Space” as they waited in virtual queues for up to eight hours, with many proving unsuccessful. Prices ranged between $49 – $449, but many have appeared on resale sites such as StubHub for up to $22,700 causing much “Bad Blood” between the retailer and fans.

The Eras tour is set to see Swift perform songs from albums across her entire career, as well as music from the recent “Midnights” record. Will the tour make it to Ireland? On her last visit, she found it difficult to fill Croke Park for two nights, but her popularity has never dwindled and with her “Reputation” as strong as ever she could be about to make a comeback in “Style”.

Elton John is the latest artist to test the waters in the gaming by launching his own virtual world on Roblox.

Titled ‘Elton John Presents: Beyond the Yellow Brick Road’, fans of the legendary singer can now immerse themselves in his music through challenges set to hit songs, trivia quizzes and scavenger hunts. Players can also dress their characters in their favourite Elton outfit, including free items inspired by his infamous 1975 concert at Dodger Stadium, and in celebration of his return to the same venue for the first time in 47 years.

In addition VIP fans, who purchased access by purchasing “yellow bricks” will have their Roblox avatars featured on screen at the final Dodger Stadium show on November 20th.

The Grammy award winner is one of music’s most durable artists, seamlessly reinventing himself time and time again while continuing to deliver hit after hit, but always with a sense of fun. Very few people would have been a natural fit with this partnership but it could be something which paves the way for a wider audience to access the world of gaming and VR. It may not be Goodbye Yellow Brick Road just yet.

What’s worse than a Christmas World Cup with England in the final? Many things.

But Baddiel, Skinner and The Lightning Seeds releasing a festive version of their 1996 hit, Three Lions, is one of them.

Three Lions (It’s Coming Home for Christmas) has been unleashed on the world ahead of the World Cup kick off this weekend, 25 years after the original bled into the ears of football fans across Europe. The new version features the familiar dulcet tones of Frank Skinner and David Baddiel with some of the classic lyrics changed to reference the Christmas season.

They do poke fun at the “years of hurt” – pointing it at squarely at the men’s team, following the England Lionesses Euro 2022 win earlier this year.

There are an abundance of reasons why many people would not like to see England win a major tournament, but at least if they do win it, we may finally be able to retire this dirge, like the footballing greats before it.

You probably won’t be able to avoid hearing it, but you can not hear it now, by not clicking here.

The use of Artificial Intelligence in music is something which has made huge strides over the past number of years, mainly in evolving how music is produced, but recently a new find by   Tencent Music has stepped that up a gear. The Chinese music platform has claimed it has created and released over 1,000 tracks containing vocal recordings which have been created by AI, mimicking the human voice.

TME has stated that this tech can “quickly and vividly replicate singers’ voices to produce original songs of any style and language” and one of these tracks has already reached over 100 million streams, becoming the first song by AI to achieve the milestone.

It is reported that over 100,000 songs are uploaded to streaming platforms every single day, so how would that figure rise if AI had the ability to create a limitless number of tracks? Would we see real life artists make music long after their peak– delegating their performance to a bot? Recently Bruce Willis sold his image to an AI-based video company so they could continue making movies with him starring. Are we about to see music take a similar path?