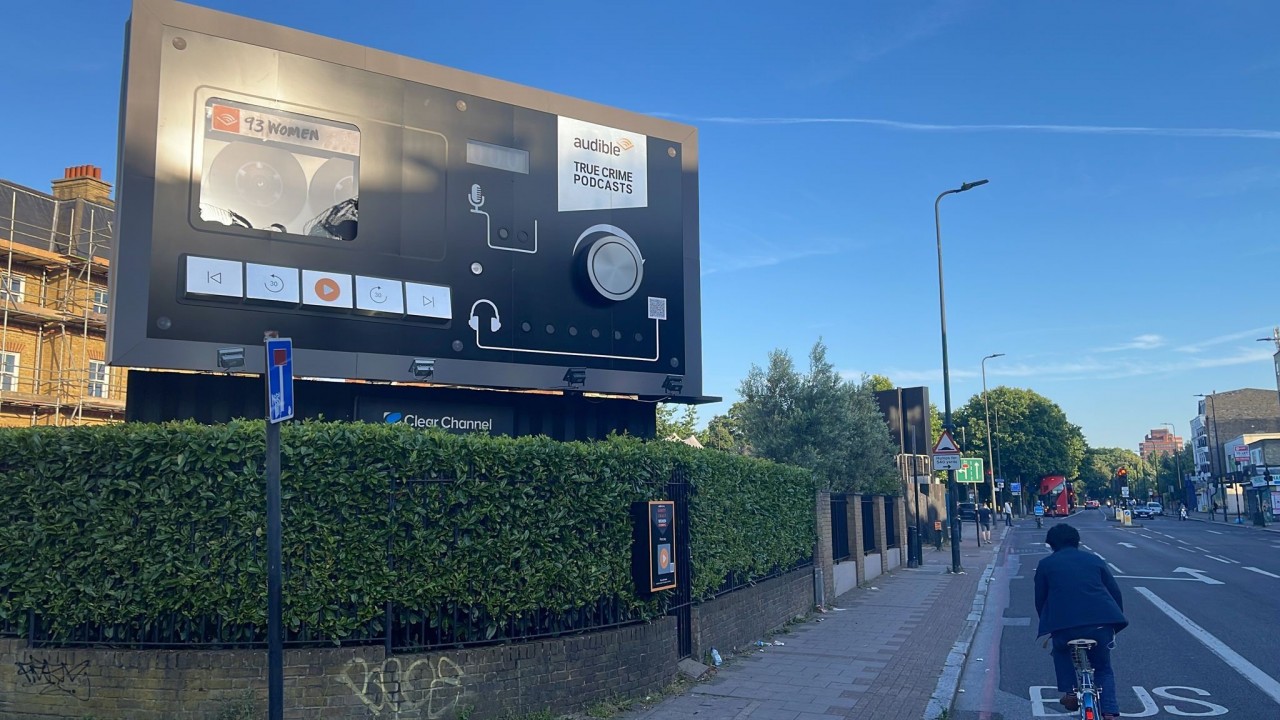 In this week’s OUR TAKE, Glastonbury bares all as part of a liberating photographic exhibition. Audible is erecting interactive billboards for commuters across the world and Florence + the Machine merges weaving with marketing via a series of stunning tapestries. In the AI world, a new software is creating life-like art pieces that are both weird and wonderful.

Last weekend, Glastonbury returned to Worthy Farm after two long years and lived up to its reputation as the greatest festival in the world.

Away from the main stages and hours of broadcasted footage, we spotted an interesting photo project by contemporary photographer Tom Hunter who set out on a mission to capture the freedom and liberation of the original festival scene by creating a series of nude portraits of festival goers in a make-shift outdoor studio on the site.

The project originally started in Glastonbury in 2017 and returned in 2019. Each year Tom invited festival goers who were brave enough to lay it all bare and pose for a shot. The resulting images are beautiful, capture a range of people, completely free of festival garb.

Tom even returned to this year’s festival and vowed to strip down himself to make the experience and exhibition as authentic as it could be. The culmination of the three years of portrait-making, Tom Hunter will show his Glastonbury Portraits, ‘Where Have All the Flowers Gone’ at the Martin Parr Foundation in Bristol until July 10th.

It’s a beautiful idea entirely in keeping with the essence of Glastonbury. You can check out more of the portrait shots here.

We’ve had our Picassos and Monets but the art world is about to meet some AI masters thanks to advances in image-generation.

According to these updates, users are now allowed to share realistic face photos created by the system after developers put in place safeguards designed to prevent the creation of deepfake images. Specifically, the system now automatically rejects attempts to create the likeness of any public figures, including celebrities – somewhere in the world Tom Cruise is leaping with joy. The updates also block users from uploading images of human faces in order to generate similar faces. Previously, the system’s safeguards only prevented users from making images of political figures. Researchers have already begun sharing some early examples, and the results are… well, pretty weird.

We love items that are different and stand out and when it comes to billboards, innovations go a lot further. Digital billboards have made billboard advertising more effective and cost efficient for advertisers who need to change their message more frequently. It also helps things stand out and help consumers take notice.

Step forward Audible, who has rolled out interactive billboards that play its audiobooks and podcasts covering the criminal underworld. As part of the ‘A Line-up Unlike Any Other’ campaign, Audible has installed the interactive billboards, with the first one featuring a cassette image and the series name ’93 women.’ Commuters are able to engage with the audio about the series by scanning a QR code, which will take them to the dedicated title landing pages on audible.co.uk.

Simple, stand-out and smart. A great additional to an overall campaign.

To celebrate the release of Florence + the Machine’s fifth album, Dance Fever, Spotify has commissioned a set of tapestries which have been hailed as the world’s first ‘tapestry billboards’. Taking inspiration from the 1800s, the three hand-woven tapestries depicting lead singer Florence Welsh are simply EXTRAORDINARY!

The tapestry style not only suits the poetic lyrics of the band, they reflect the singer’s passion for Pre-Raphaelite art. And her flaming red hair and classical looks are a perfect match for the 19th Century style. The tapestries are true to life in scale, measuring a grandiose 2 x 2 meters.

Welch said, ‘to be transported back to my favourite era and reimagined in the style of the leading women who inspired Dante Gabriel Rossetti and William Holman Hunt is a dream I never imagined, on top of being hung in one of my most loved galleries in my hometown of South London.’

The work was exhibited at the Dulwich Picture Gallery in London. To further engage the spectator, Spotify have collaborated with the band to create a ‘special album experience’ on the app and give fans an insight into the inspiration and the creative process on how the album was made. We are head over heels about this exquisite collaboration to promote the album. The connection points between the created artworks, music and the artist add layers of intrigue and the result is so bold and stylish. Let’s watch and see if tapestries make a comeback into fashion now!