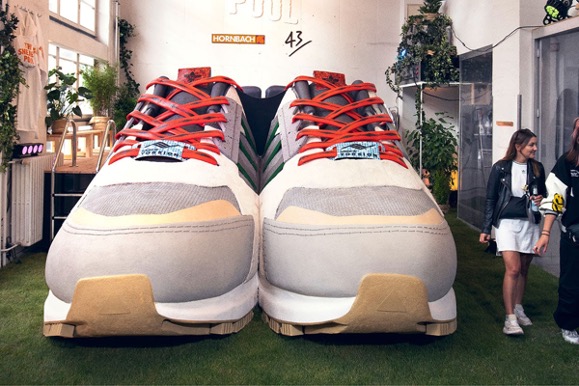 In this week’s Our Take, we check out some incredible works from across the globe including a striking campaign in Honduras which addresses the ban on the morning after pill, a project bringing sneakers and pools together to create… you guessed it… a sneaker pool for Berlin Fashion Week. We are also loving a new campaign from Gymshark which shines a light on mental health taboos amongst men, and no one should be sleeping on this Citizen M campaign to celebrate the opening of their new hotel. In the world of sound and design we check out the future of soundscape experiences with a new project by Yuri Suzuki.

With the goal of overturning the law that prohibits the distribution and sale of emergency contraceptives within Honduran territory, GE PAE and Ogilvy & Mather Honduras launched the campaign MORNING AFTER ISLAND.

The striking campaign saw multiple women journey to a small wooden platform set in international waters to “take a medication, that anywhere else on the continent, she could buy and use legally.” The campaign serves as an example of the absurd lengths women take to live independently. A surreal piece of advertising that contradicts the conservative ideals of this Latin American nation. Since the 2009 decree prohibiting the sale and use of emergency contraceptive pills, more than 350,000 underage Honduran girls have given birth.

A campaign worthy of a Gold Glass Lion at this year’s Cannes festival. We love to see it.

We love sneakers… we love swimming pools… but a sneakerpool? Yeah actually, we can get down with that.

This super smart activation from German DIY brand Hornbach put a serious smile on our faces this week. Working with agency Heimat Berlin, the focus was Berlin’s Premium Fashion Weekend, they showed a little creative thinking can go a long way in promoting the store range of outdoor goods. Working with Heimat and iconic Berlin-based streetwear store 43einhalb, the team created a swimming pool in the shape of a pair of supersized sneakers, which was unveiled at an exclusive launch event.

Built by production company Neulant van Exel using materials that can be found in any Hornbach store, the ‘Sneakerpool’ is modelled on the Adidas ZX 10000s, which was chosen by the local streetwear community.

Now, where did I leave my tool belt…

Sound, experience and installation designer Yuri Suzuki has produced a lot of cool sh*t over the years – from the AR Music Kit for Google that lets you turn anything into a musical instrument, to big scale interactive installations like ‘Sonic Bloom’. We’re fans.

His latest work is an installation in a series called ‘Sound of the Earth: Chapter 3’ – it’s an imposing, 4-metre wide, black sphere embedded with speakers that produce a beautiful soundscape based on sounds submitted by people from around the world.

With every new sound added – including everything from ambulance sirens to waterfalls to snippets of conversations from people’s kitchens – the project uses machine learning to link them to positions on the globe and expand the composition to a weird and wonderful arrangement.

The artwork is a reminder that everyone can find common ground and connection when we listen to each other. You can listen in online and add your own sound to the mix by visiting soundoftheearth.org.

‘Deload’, Gymshark’s newest pop up in East London, has turned quite a few heads (all positive vibes) over the last week. The ‘safe space barber shop’ offered free trims to visitors and to avoid short cuts in mental health, encouraged guests to speak about their feelings and emotions in a comfortable environment with mental health trained barbers.

The concept was developed based on research that men are often more inclined to confide in their barbers. ‘Deload’ is part of the fitness brand’s ongoing mental health initiative, where Gymshark is active running events and activations with CALM and The JED Foundation.

A spokesperson from the brand vocalised the ambition saying ‘We want to talk about men’s mental health. We don’t talk about it enough – an awful lot of men are struggling’.

We were really impressed with the concept here at Sweartaker and admire Gymshark contributing to the very important conversation on men’s mental health and taking action!

Ahhh the many faces of sleep. A visage reserved for the privacy of one’s home or the subject of a photo shoot for an entire city to see? KesselsKramer think the latter.

To mark the opening of Citizen M’s new hotel at London’s Victoria Station the agency decided to not only capture portraits of drowsy, KO’d faces in deep slumber but to plaster them, giant-scale, across the windows of the new hotel.

London-based, Jamaican-born photographer Amber Pinkerton was the woman chosen to capture the portraits, depicting a diverse group of ‘citizens’ shot from the perspective of pillow. Although the shots might not reveal their subject’s finest beauty moments, there is something special about them. Real is beautiful and we are loving the squished up hairy armpit vibes, as much as the drooly one-eye-open shots. Check them out for yourself here.